Lecture by Marcel Pelgrom-Moore and me: 40 years of scaling and beyond

Over several decades Moore’s law has dominated every micro-electronics engineers’ life. Now the economic limits of scaling have been reached, the electronics community faces the crucial question where to look for new challenges, preferably with an impact comparable to what has been achieved in communication, computing and consumer electronics. In this talk a few personal observations on the past journey will be presented, with an eye on what ideas can be used for future research and development.

Marcel Pelgrom joined in 1979 Philips Research Laboratories, where his research has covered topics as Charge Coupled Devices, MOS matching properties, analog-to-digital conversion, digital image correlation, and various analog building block techniques. He has headed project teams and was a department head for mixed-signal electronics research. In 2003 and 2014 he spent a sabbatical in Stanford University where he was appointed a consulting professor. Since 2013 is an honorary professor at the KU Leuven. He has written over 40 publications, three books, seven book chapters and holds 37 US patents. He is consulting companies and lecturing at Twente and Delft Universities, and for MEAD/EPFL. He is the 2017 recipient of the IEEE Gustav R. Kirchhoff award. 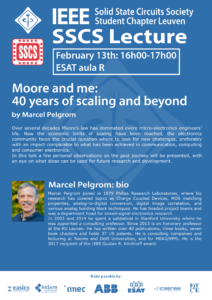 The full presentation can be found at the following link: